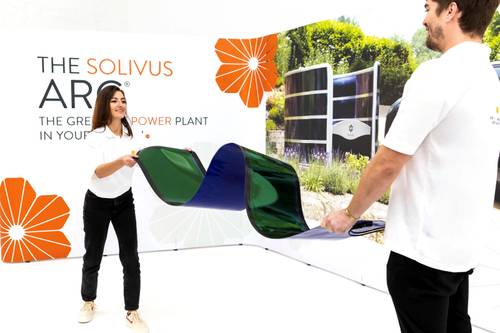 Solivus, a UK startup that has developed “ultra-thin” solar panels that can be fitted to commercial rooftops, has secured £2.4m in a seed funding round.

London-headquartered Solivus said it will use the capital to fuel commercial expansion plans for its “skin-like” solar film that can be wrapped across flat roofs.

The company is primarily targeting commercial buildings such as offices, warehouses and stadiums.

It is currently trialling its technology on hangar roofs at Cotswold airport, where it powers the site and a new hydrogen aircraft.

Solivus says this approach is “more practical” compared to traditional solar panels, which are usually sold in bulky rectangular blocks.

It has also launched a solar charging structure for homeowners that can sit at ground level and be used to charge electric cars.

As part of the investment, Solivus will join the Founders Factory G-Force sustainability seed programme, where it will spend six months receiving advice on scaling its business.

Solivus CEO: clean energy no longer a ‘nice to have’

Founded in 2016, the latest investment brings Solivus’ total funding to £5m, with previous capital coming via a 480% oversubscribed Crowdcude campaign.

The company says its approach can help the UK’s transition to renewable energy by tapping into the unused rooftop space of cities such as London.

“Amid the escalating climate and energy crisis, powering our homes and businesses with clean energy is no longer a ‘nice to have’ but an absolute necessity,” said Jo Parker-Swift, CEO of Solivus. “With this new funding, we want to scale our business and maximise the disruptive potential of our ultra-thin and lightweight solar solutions by facilitating a new generation of solar users ready to have a positive impact on the planet.”

Solivus recently appointed Juliet Davenport OBE to its board adviser. Davenport was previously the founder and CEO of Good Energy, a renewable electricity supplier.

Louis Warner, chief operating officer at Founders Factory, said: “We face a perfect storm when it comes to energy. Households and businesses are feeling the pinch in their pockets from traditional providers, governments are struggling to fulfil COP26 commitments and our world is heating up.

“With the green premium so low on solar power, this is the most attractive alternative energy source at our disposal right now.”